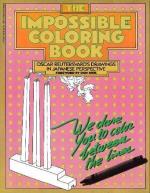 Get Oscar Reutersvard from Amazon.com
View the Study Pack

This Biography consists of approximately 1 page of information about the life of Oscar Reutersvard.

World of Mathematics on Oscar Reutersvard

Known for his artistic renderings of shapes that are not physically possible, Oscar Reutersvard is widely acknowledged as "the father of impossible figures." His work has inspired such other great artist-mathematicians as Maurits Cornelius Escher and Roger Penrose.

Despite his fame, very little information about Reutersvard's personal life exists. He was born in Sweden in 1915.

Reutersvard's contributions to the art world began early, but did not show the originality for which he would become known until he started deliberately drawing three-dimensional objects that could not exist in real life. He is believed to be the first artist to do this; previous impossible figures were apparently merely the result of mistakes in artistic perspective.

In 1934, Reutersvard created an impossible figure (also known as an "undecidable figure") that he named the impossible triangle. Formed from a series of cubes, the triangle at first seems like the simple geometrical shape with which all schoolchildren are familiar. However, as the eye tries to follow its outlines, the triangle abruptly becomes a dizzying experience as its bottom link plays havoc with the brain's intuitive knowledge of physical laws.

The impossible triangle and Reutersvard's other works are so popular in his homeland that the government commissioned him to make a series of stamps using his art in 1982. Over his lifetime, he has created thousands of impossible figures, and numerous books have been published on his works in Russian, Polish, and Swedish.

More summaries and resources for teaching or studying Oscar Reutersvard.

Oscar Reutersvard from Gale. ©2005-2006 Thomson Gale, a part of the Thomson Corporation. All rights reserved.