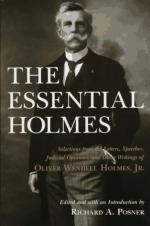 This Biography consists of approximately 2 pages of information about the life of Oliver Wendell Holmes.

Oliver Wendell Holmes (1809-1894), American physician and author, contributed to the advancement of medicine and wrote witty essays and popular poems.

Oliver Wendell Holmes was born in Cambridge, Mass., on Aug. 29, 1809, scion of a well-established New England family. Following his graduation from Harvard in 1829, he studied at the law school for a year (during which time he wrote the popular poem "Old Ironsides"). He gave up law in favor of a career in medicine. He rounded out his training at the Harvard Medical School with 2 years of study in Paris (1833-1835), where he learned new techniques and approaches in medicine, reflected in two important early papers, "Homeopathy, and Its Kindred Delusions" (1842) and "The Contagiousness of Puerperal Fever" (1843).

Holmes took his medical degree at Harvard in 1836. From 1838 to 1840 he served as professor of anatomy at Dartmouth College. In 1840 he married Amelia Lee Jackson and returned to general practice. He was appointed Parkman professor of anatomy and physiology at Harvard Medical School in 1847 and served as dean from 1847 to 1853. Holmes remained at Harvard until 1882 and established himself as an excellent lecturer and teacher.

Holmes's deterministic belief that man was the product of his heredity and environment provided the direction for his three pioneering, psychologically oriented "medicated" (as he termed them) novels: Elsie Venner (1861), The Guardian Angel (1867), and A Mortal Antipathy (1885).

Holmes held very definite opinions on a wide variety of subjects. He found the perfect outlet for expressing his ideas in the pages of the Atlantic Monthly, to which he contributed several series of chatty essays interspersed with light poetry. These were gathered in The Autocrat of the Breakfast-Table (1858), The Professor at the Breakfast-Table (1860), The Poet at the Breakfast-Table (1872), and Over the Teacups (1891). In addition to these and his volumes of verse, he also wrote biographies of John L. Motley (1879) and Ralph Waldo Emerson (1885). Among his best-known poems are "The Deacon's Masterpiece," "The Last Leaf," "The Chambered Nautilus," "My Aunt," "The Moral Bully," and "Brother Jonathan's Lament for Sister Caroline."

As scientist, teacher, lecturer, essayist, and writer of light verse, Holmes left his mark on his age, and many honors came to him both at home and abroad. He died on Oct. 7, 1894.