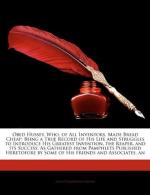 Get Obed Hussey from Amazon.com
View the Study Pack

This Biography consists of approximately 2 pages of information about the life of Obed Hussey.

World of Invention on Obed Hussey

Obed Hussey was an avid inventor who rarely shied away from a challenge. He was especially intrigued by the development of new agricultural machines. Born in Maine, Hussey moved to Nantucket Island, Massachusetts, when he was very young. He probably worked as a sailor for a while. By the time he was thirty, he was in Cincinnati, Ohio, and working on his inventions.

In 1830 someone suggested to Hussey that he invent a machine for cutting grain. He had already invented, among other things, a corn-husking machine, a corn grinder, and a sugarcane press. He went to work on this latest challenge and travelled to Baltimore, Maryland, the following year to conduct his reaper experiments at the farm implement factory owned by Richard B. Chenaworth.

In 1832, Hussey returned to Cincinnati and built his first successful reaper. It was publicly demonstrated in July 1833 to the Hamilton County, Ohio, Agricultural Society. Hussey's machine consisted of a reciprocating sawtooth bar driven by gears turned by the main drive. The machine was horse-drawn. As the blade moved forward, the stalks of grain fell onto a platform where they were manually bound. This machine sold well enough between 1834 and 1838 in Illinois, New York, Pennsylvania, and Maryland that in 1838 Hussey opened a large factory in Baltimore.

Even as Hussey was developing his first reaper, Cyrus McCormick was working on one of his own at his father's forge in Virginia. McCormick's reaper was patented in 1834, and the two inventors entered into direct competition. Both Hussey and McCormick built improved versions of their machines in an effort to stay ahead of each other, and both exhibited their machines at the Crystal Palace industrial exhibition in London in 1851.

In the years following the exhibition, McCormick gradually eroded Hussey's standing in the reaper industry, shrewdly acquiring the patents of others. Hussey had an intolerance for other people and obstinately preferred to improve his machines himself. The difference between the two men gave the competitive edge to McCormick, and in 1858, Hussey sold out.

He went to work once again, however, this time on a steam-powered plow. His work was cut short in 1860 when he died after falling under a moving train in New England.

More summaries and resources for teaching or studying Obed Hussey.

Obed Hussey from Gale. ©2005-2006 Thomson Gale, a part of the Thomson Corporation. All rights reserved.