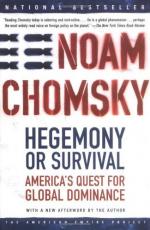 Get Noam Avram Chomsky from Amazon.com
View the Study Pack

This Biography consists of approximately 4 pages of information about the life of Noam Avram Chomsky.

Noam Chomsky (born 1928), American linguist and philosopher, was responsible for the theory of transformational grammar. As a political commentator he was critical of American foreign and domestic policy.

Noam Avram Chomsky was born in Philadelphia on December 7, 1928. He studied at the University of Pennsylvania, receiving his Ph.D. in linguistics in 1955. After that year, he taught at the Massachusetts Institute of Technology, where he was Institute Professor of Linguistics.

Chomsky received international acclaim for his work in linguistics, philosophy, and social/political theory. A prolific writer, he revolutionized linguistics with his theory of transformational-generative grammar. His work in epistemology and philosophy of mind was controversial; his social and political writings were consistently critical of American foreign and domestic policy.

In two seminal books on linguistic theory--Syntactic Structures (1957) and Aspects of the Theory of Syntax (1965)--Chomsky argued that the grammar of human language is a formal...

Noam Avram Chomsky from Gale. ©2005-2006 Thomson Gale, a part of the Thomson Corporation. All rights reserved.