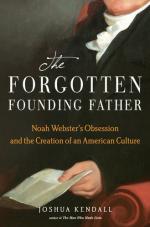 Get Noah Webster from Amazon.com
View the Study Pack

This Biography consists of approximately 3 pages of information about the life of Noah Webster.

Noah Webster (1758-1843), American lexicographer, remembered now almost solely as the compiler of a continuously successful dictionary, was for half a century among the more influential and most active literary men in the United States.

Noah Webster was born on Oct. 16, 1758, in West Hartford, Conn. In 1774 he entered Yale, sharing literary ambitions with his classmate Joel Barlow and tutor Timothy Dwight. His college years were interrupted by terms of military service. After his graduation in 1779, he taught school in Hartford, Litchfield, and Sharon, read widely, and studied law. He was admitted to the bar and received his master of arts degree in 1781. Dissatisfied with the British-made textbooks available for teaching, he determined to produce his own. He had, he said, "too much pride to stand indebted to Great Britain for books to learn our children."

Webster devised the first of his long series of American...

More summaries and resources for teaching or studying Noah Webster.

Noah Webster from Gale. ©2005-2006 Thomson Gale, a part of the Thomson Corporation. All rights reserved.