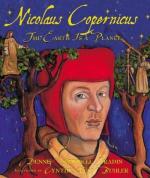 Get Nicolaus Copernicus from Amazon.com
View the Study Pack

This Biography consists of approximately 5 pages of information about the life of Nicolaus Copernicus.

The Polish astronomer Nicolaus Copernicus (1473-1543) was the founder of the heliocentric ordering of the planets.

Nicolaus Copernicus was born on Feb. 19, 1473, in Torun about 100 miles south of Danzig. He belonged to a family of merchants. His uncle, the bishop and ruler of Ermland, was the person to whom Copernicus owed his education, career, and security.

Copernicus studied at the University of Cracow from 1491 to 1494. While he did not attend any classes in astronomy, it was during his student years there that Copernicus began to collect books on astronomy and mathematics. Some of these contain marginal notes by him dating back to that period, but it remains conjectural whether Copernicus had already made at that time a systematic study of the heliocentric theory.

Copernicus returned to Torun in 1494, and in 1496, through the efforts of his uncle, he became a canon at Frauenburg, remaining in that office for the...

More summaries and resources for teaching or studying Nicolaus Copernicus.

Nicolaus Copernicus from Gale. ©2005-2006 Thomson Gale, a part of the Thomson Corporation. All rights reserved.