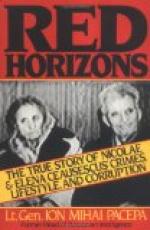 Get Nicolae Ceausescu from Amazon.com
View the Study Pack

This Biography consists of approximately 2 pages of information about the life of Nicolae Ceausescu.

Nicolae Ceausescu (1918-1989) was a Romanian leader whose attempts to fuse nationalism and communism resulted in such a brutal dictatorship that the Romanians overthrew his regime.

Nicolae Ceausescu was born of a peasant family on Jan. 26, 1918, in Scornicesti in the Olt country. At the age of 11 he began working in the factories of Bucharest. He participated in the social movements at the beginning of 1930s and joined the revolutionary working-class movement in 1932. The following year Ceausescu became a member of the Union of Communist Youth (UCY) and of the Romanian Communist party (RCP). He was successively secretary of Prahova and Oltenia regional committees of UCY and was a representative of the democratic youth in the Antifascist National Committee (1934).

Between 1936 and 1938 Ceausescu was imprisoned several times for his revolutionary, patriotic, and antifascist activities. It was there that he met and became close with Gheorghe...

More summaries and resources for teaching or studying Nicolae Ceausescu.

Nicolae Ceausescu from Gale. ©2005-2006 Thomson Gale, a part of the Thomson Corporation. All rights reserved.