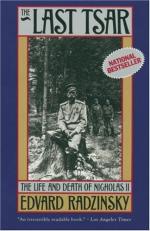 Get Nicholas, II from Amazon.com
View the Study Pack

This Biography consists of approximately 5 pages of information about the life of Nicholas, II.

The son of Alexander III, Nicholas was born on May 6, 1868. He studied under private tutors, was an accomplished linguist, and traveled extensively in Russia and abroad. In 1890-1891 he made a voyage around the world. Nicholas held customary commissions in the guards, rising, while heir apparent, to the rank of colonel. His participation in affairs of state prior to the death of his father was limited to attendance at meetings of the committee of ministers and of the state council.

Throughout his life Nicholas kept with remarkable regularity a diary that throws much light on his character and interests. Hardly a day passed without a record of what Nicholas regarded as its most...

More summaries and resources for teaching or studying Nicholas, II.

Nicholas, II from Gale. ©2005-2006 Thomson Gale, a part of the Thomson Corporation. All rights reserved.