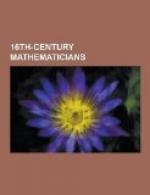 Get Niccolo Tartaglia from Amazon.com
View the Study Pack

This Biography consists of approximately 3 pages of information about the life of Niccolo Tartaglia.

The Italian mathematician Niccolo Tartaglia (1500-1557) was the first person to apply mathematics to the solution of artillery problems.

Niccolo Tartaglia, born Niccolo Fontana in Brescia, was raised in poverty by his mother. His father was killed in the French occupation of the town in 1512, and it was then that Niccolo received a saber cut which was supposed to have been the cause of his stammering for the rest of his life. Because of this disability, he gave himself the nickname of Tartaglia, the "stutterer." He was a self-taught engineer, surveyor, and bookkeeper and is said to have used tombstones as slates because he was too poor to buy writing materials. As he grew to manhood, he demonstrated definite mathematical abilities, and he established himself as a teacher of mathematics in Venice in 1534.

More summaries and resources for teaching or studying Niccolo Tartaglia.

Niccolo Tartaglia from Gale. ©2005-2006 Thomson Gale, a part of the Thomson Corporation. All rights reserved.