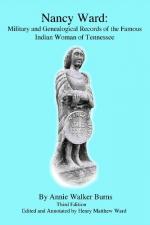 Get Nancy Ward from Amazon.com
View the Study Pack

This Biography consists of approximately 6 pages of information about the life of Nancy Ward.

Nancy Ward (1738--1822), a mixed-blood Cherokee woman who lived during the eighteenth century, was the Cherokee nation's last "Beloved Woman." At a time that the Cherokee nation was frequently at battle with American troops and white settlers who had occupied their traditional lands, Ward made repeated attempts to establish peace between the various parties.

Nancy Ward is believed to have been born around 1738 in the Cherokee village of Chota, in what is today Monroe County, Tennessee. Chota, the Cherokee capital, was known as a "City of Refuge," meaning that it was a place where those in distress could seek asylum.

When Ward was growing up, Cherokee lands were bordered by the Ohio River in the north and the Tennessee River in the south. They extended to the headwaters of the Coosa, the Chattahoochee, the Savannah, the Saluda, and the Tugaloo Rivers. Today the traditional Cherokee lands...

More summaries and resources for teaching or studying Nancy Ward.

Nancy Ward from Gale. ©2005-2006 Thomson Gale, a part of the Thomson Corporation. All rights reserved.