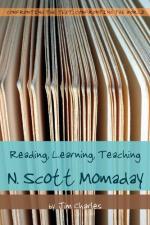 Get N. Scott Momaday from Amazon.com
View the Study Pack

This Biography consists of approximately 1 page of information about the life of N. Scott Momaday.

When N. Scott Momaday received the 1969 Pulitzer Prize for fiction for his first novel, House Made of Dawn (1968), the literary community recognized the arrival of a major contemporary Native American writer; the event marked the beginning of what Kenneth Lincoln would later describe as the Native American Renaissance. Since then Momaday has told his story and the stories of his people, the Kiowa, in such works as The Way to Rainy Mountain (1969), The Gourd Dancer (1976), The Names: A Memoir (1976), The Ancient Child (1989), and In the Presence of the Sun: A Gathering of Shields (1992). By drawing attention to the high quality and cultural richness...

N. Scott Momaday from Gale. ©2005-2006 Thomson Gale, a part of the Thomson Corporation. All rights reserved.