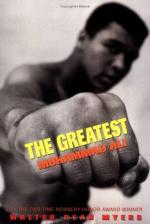 Get Muhammad Ali from Amazon.com
View the Study Pack

This Biography consists of approximately 4 pages of information about the life of Muhammad Ali.

Muhammad Ali (born Cassius Clay, 1942) was the only professional boxer to win the heavyweight championship three times. With his outspoken political and religious views he has provided leadership and an example for African American men and women around the world.

Born Cassius Marcellus Clay on January 17, 1942, at Louisville, Kentucky, Muhammad Ali began boxing at the age of 12. A white policeman named Joe Martin featured Ali on his early television show, "Tomorrow's Champions," and started him working out at Louisville's Columbia Gym. An African American trainer named Fred Stoner taught Ali the science of boxing, instructing him to move with the grace and subtlety of a dancer.

Ali built an impressive amateur record which led him to both the national Amateur Athletic Union (AAU) and Golden Gloves championships. At the age of 18 he competed in the 1960 Olympic games held at Rome...

More summaries and resources for teaching or studying Muhammad Ali.

Muhammad Ali from Gale. ©2005-2006 Thomson Gale, a part of the Thomson Corporation. All rights reserved.