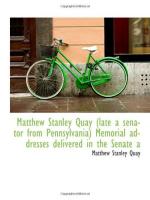 Get Matthew Stanley Quay from Amazon.com
View the Study Pack

This Biography consists of approximately 2 pages of information about the life of Matthew Stanley Quay.

Matthew Stanley Quay (1833-1904) was a U.S. senator and Republican party boss in Pennsylvania. His political genius made "Quayism" a synonym for shrewd, even ruthless, politics in the "gilded age."

Matthew Quay was born on Sept. 30, 1833, in Dillsburg, Pa., the son of a Presbyterian minister. In 1850 he graduated from Jefferson College (now Washington and Jefferson) and in 1854 was admitted to the bar. He mastered several languages and boasted one of America's finest private libraries.

Quay's political career began modestly when, in 1856, he was elected prothonotary of Beaver County. His work in the gubernatorial election of 1860 gained the attention of state politicians. He served with distinction in the Civil War and won the Congressional Medal of Honor. In 1865 he was elected to the state House of Representatives.

Initially opposed to the state organization of Republican boss Simon Cameron, Quay turned from politics in 1867 to edit and publish the...

Matthew Stanley Quay from Gale. ©2005-2006 Thomson Gale, a part of the Thomson Corporation. All rights reserved.