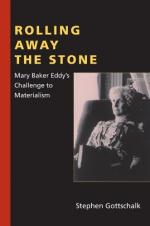 Get Mary Baker Eddy from Amazon.com
View the Study Pack

This Biography consists of approximately 2 pages of information about the life of Mary Baker Eddy.

The American founder of the Christian Science Church, Mary Baker Eddy (1821-1910) showed a unique understanding of the relationship between religion and health, which resulted in one of the era's most influential religious books, "Science and Health."

Mary Baker was born July 16, 1821, at Bow, N.H. A delicate and nervous temperament led to long periods of sickness in her early years, and chronic ill health made her weak and infirm during much of her adult life. In 1843 she married George Washington Glover, but he soon died and she returned home, where she had her only child. She married Daniel Patterson, a traveling dentist, in 1853; however, his frequent trips and her invalidism led to a separation by 1866 and a divorce several years later. In 1877 she married Asa Gilbert Eddy.

In her quest for health, she had visited Dr. Phineas P. Quimby of Portland, Maine, in 1862, and found that his nonmedical principles cured her. She absorbed his system and became a disciple. In 1866 she claimed to have been completely cured of injuries suffered in a fall by what she called "Christian science." By 1870 she was teaching her new-found science in collaboration with practitioners who did the healing. Her key ideas were published in Science and Health with Key to the Scriptures (1875).

This book and Mary Baker Eddy's forceful personality attracted numerous followers, and on Aug. 23, 1879, the Church of Christ, Scientist, was chartered. Asa Eddy helped organize the movement. Mrs. Eddy chartered the Massachusetts Metaphysical College in 1881, where she taught her beliefs. Asa Eddy died in 1882, and the next year Mrs. Eddy began to publish the Journal of Christian Science.

Her fame spread, support grew, and Mrs. Eddy became wealthy. But dissensions divided the Church, and in 1889 "Mother Eddy" moved to Concord, N.H., apparently withdrawing from leadership. In seclusion, however, she restructured the Church organization: the First Church of Christ, Scientist, in Boston was established on Sept. 23, 1892, as the mother church. Mrs. Eddy was its head, and all other churches were subject to its jurisdiction. Though internal quarrels diminished, they continued to the end of her life. Partly to guarantee a trustworthy newspaper for the movement, Mrs. Eddy began publishing the Christian Science Monitor in 1908. That year she moved to Chestnut Hill near Boston, where she died on Dec. 3, 1910.

Mary Baker Eddy from Gale. ©2005-2006 Thomson Gale, a part of the Thomson Corporation. All rights reserved.