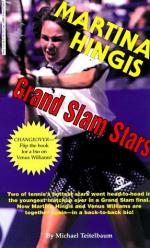 Get Martina Hingis from Amazon.com
View the Study Pack

This Biography consists of approximately 10 pages of information about the life of Martina Hingis.

Some athletes are born winners; other have to work hard to succeed. Tennis star Martina Hingis is both. Named after legendary champion Martina Navratilova, she has great natural ability that she has worked for 14 years to develop. In 1997 Hingis became the youngest player ever to earn the number-one world ranking, taking over the top spot from Steffi Graf. She also became the youngest player in more than 100 years to win one of tennis's Grand Slam singles titles when she won the Australian Open. Hingis then added the Wimbledon and U.S. Open titles to her trophy case, dominating the women's tour like few players before her. At only 17-years-old, she should have many more championships in her future.

What's in a Name"

Martina Hingis was born September 30, 1980, in Kosice, Czechoslovakia (now Slovakia). She was born to be a tennis player. Hingis's parents, both highly ranked Czech...

More summaries and resources for teaching or studying Martina Hingis.

Martina Hingis from UXL. ©2005-2006 by U•X•L. U•X•L is an imprint of Thomson Gale, a division of Thomson Learning, Inc. All rights reserved.