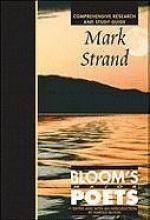 Get Mark Strand from Amazon.com
View the Study Pack

This Biography consists of approximately 5 pages of information about the life of Mark Strand.

The fourth Poet Laureate of the United States (1996-1997), Mark Strand (born 1934) wrote poems on subjects ranging from dark and terrible wrestlings with one's fears and alter egos to joyous celebrations of life and light. He won the Pulizer Prize for poetry in 1999.

Mark Strand, the fourth American poet to be given the title of Poet Laureate, once remarked that he was intrigued by the epigraph from Jorge Luis Borges' story, "Tlon, Uqbar, Orbis Tertius": "while we sleep here, we are awake elsewhere and that in this way every man is two men."

Borges' idea, interestingly enough, describes the diversities and paradoxes inherent in the creative spirit of Mark Strand himself and the major themes and motifs that his poems and fictions dealt with over the years.

At times Strand's poetic voice is plain and conversational, sparse of detail almost to a fault, and filled with dark images...

More summaries and resources for teaching or studying Mark Strand.

Mark Strand from Gale. ©2005-2006 Thomson Gale, a part of the Thomson Corporation. All rights reserved.