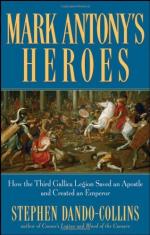 Get Mark Antony from Amazon.com
View the Study Pack

This Biography consists of approximately 5 pages of information about the life of Mark Antony.

The Roman politician and general Mark Antony (ca. 83-30 BC) was the chief rival of Octavian for the succession to the power of Julius Caesar.

Mark Antony (in Latin, Marcus Antonius) came from a distinguished Roman family. His grandfather had been one of the leading orators in Rome, and his father, Marcus Antonius Creticus, had died in an expedition against pirates. As a young man, Antony became involved in tribunate politics and the Roman East, two areas that were to play a major role in his later life. Among his closest friends was a young man, Curio, who as tribune was a key figure in the conflict between Caesar and the Senate and Pompey. In 58 Antony appears to have been among the supporters of the powerful and violent tribune Clodius.

Antony received his first overseas experience in the East when, during 57-55, he served with...

More summaries and resources for teaching or studying Mark Antony.

Mark Antony from Gale. ©2005-2006 Thomson Gale, a part of the Thomson Corporation. All rights reserved.