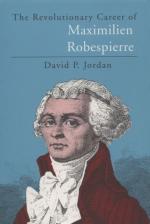 This Biography consists of approximately 5 pages of information about the life of Maximilien Fran&ccedil;ois Marie Isidore de Robespierre.

The French Revolutionary leader Maximilien François Marie Isidore de Robespierre (1758-1794) was the spokesman for the policies of the dictatorial government that ruled France during the crisis brought on by civil and foreign war.

Maximilien de Robespierre was an early proponent of political democracy. His advanced ideas concerning the application of the revolutionary principle of equality won for him the fervent support of the lower middle and working classes (the sans-culottes) and a firm place later in the 19th century in the pantheon of European radical and revolutionary heroes. These ideas and the repressive methods used to implement and defend them, which came to be called the Reign of Terror, and his role as spokesman for this radical and violent phase of the French Revolution also won for him the opprobrium of conservative opponents of the Revolution ever since.

Career before the Revolution