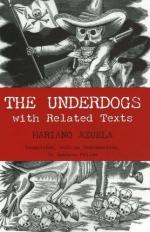 Get Mariano Azuela from Amazon.com
View the Study Pack

This Biography consists of approximately 2 pages of information about the life of Mariano Azuela.

The Mexican novelist Mariano Azuela (1873-1952) initiated the novel of the Mexican Revolution, employing realism as a means of denouncing social injustices.

Mariano Azuela was born on Jan. 1, 1873, in Lagos de Moreno, in the state of Jalisco, where he received his primary education. Later he went to Guadalajara, the state capital, to pursue a career as a surgeon in the institute which had replaced the University of Jalisco.

Dr. Azuela's literary career began in 1896 with the publication in a Mexico City newspaper of a series of articles entitled Impresiones de un estudiante (A Student's Impressions). In 1907 he published his first novel, Maria Luisa, followed by Los fracasados (The Failures) in 1908 and Mala yerba (Weeds) in 1909. The theme of these novels was fate, continued in Esa sangre (That Blood), a posthumous novel published in 1956.

Having completed his medical studies, Dr. Azuela began practicing in Jalisco, where he acquired a...

More summaries and resources for teaching or studying Mariano Azuela.

Mariano Azuela from Gale. ©2005-2006 Thomson Gale, a part of the Thomson Corporation. All rights reserved.