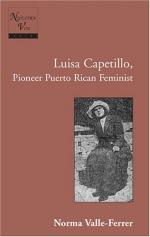 Get Luisa Capetillo from Amazon.com
View the Study Pack

This Biography consists of approximately 3 pages of information about the life of Luisa Capetillo.

A leader in the political and labor struggles of the working class at the beginning of the twentieth century, Luisa Capetillo (1879-1922) condemned the exploitation of workers by political parties, religious institutions, and capitalism. She was also a crusader for the rights of women.

Luisa Capetillo was born in Arecibo, Puerto Rico, on October 28, 1879. Her mother, Margarita Perón, was French, and her father, Luis Capetillo, was Spanish. Her biographers agree that, while she might have had some formal schooling, she was primarily self-taught. The knowledge of French she gained from her mother, for example, enabled her to read the works of French writers. History remembers her as the first woman to wear pants in public, which could be considered symbolic of the personal freedom she expressed in her actions and writings.

Championed the Cause of Female Workers

Capetillo lived at a time when the industrialization of...

More summaries and resources for teaching or studying Luisa Capetillo.

Luisa Capetillo from Gale. ©2005-2006 Thomson Gale, a part of the Thomson Corporation. All rights reserved.