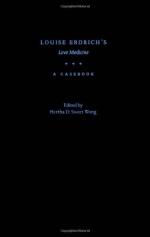 Get Louise Erdrich from Amazon.com
View the Study Pack
Related Topics
The Plague of Doves
LaRose
The Night Watchman
The Leap
Four Souls

This Biography consists of approximately 7 pages of information about the life of Louise Erdrich.

Once named one of People magazine's most beautiful people, Louise Erdrich (born 1954) is a Native American writer with a wide popular appeal. She is no literary lightweight, however, having drawn comparisons to such noted American authors as William Faulkner.

Louise Erdrich was the first of seven children born to Ralph Louis Erdrich and Rita Joanne (Gourneau) Erdrich. Born on June 16, 1954, in Little Falls, Minnesota, she was raised in Wahpeton, North Dakota. Her mother, of Ojibwe descent, was born on the Turtle Mountain Ojibwe Reservation while her father was of German ancestry. Both parents taught at a Bureau of Indian Affairs boarding school.

A Tradition of Storytelling

From childhood, the rich oral tradition of Ojibwa storytelling was a part of Erdrich's life. Her mother and grandparents told her many stories about life on the reservation during the Great Depression of the 1930s, as well as other tales. Erdrich's father...

More summaries and resources for teaching or studying Louise Erdrich.

Louise Erdrich from Gale. ©2005-2006 Thomson Gale, a part of the Thomson Corporation. All rights reserved.