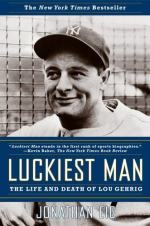 Get Lou Gehrig from Amazon.com
View the Study Pack

This Biography consists of approximately 7 pages of information about the life of Lou Gehrig.

One of baseball's greatest hitters, Lou Gehrig (1903-1941) was a teammate of Babe Ruth on the New York Yankees and drove in more runs in his productive 17-year career than all but two other men in history. But Gehrig is known primarily for having played in 2,130 consecutive games and for the crippling disease named after him.

Nicknamed the "Iron Horse," Gehrig never missed a single game as the Yankees first baseman from June 1925 through April 1939. During that time he was a fearsome hitter and prolific run-producer, with a combination of batting average and power that rivaled Ruth's. Struck down in his 30s by the crippling muscle disorder, amyotrophic lateral sclerosis (ALS), Gehrig was immortalized for his emotional farewell speech at Yankee Stadium on July 4, 1939, when he said he was "the luckiest man on the face of the earth."

More summaries and resources for teaching or studying Lou Gehrig.

Lou Gehrig from Gale. ©2005-2006 Thomson Gale, a part of the Thomson Corporation. All rights reserved.