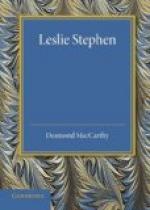 Get Leslie Stephen, Sir from Amazon.com
View the Study Pack

This Biography consists of approximately 2 pages of information about the life of Leslie Stephen, Sir.

The English historian, critic, and editor Sir Leslie Stephen (1832-1904) was one of the great popularizers of Victorian thought and literature.

Leslie Stephen was born in London on Nov. 28, 1832, the son of Sir James Stephen, a leading Evangelical and distinguished undersecretary in the Colonial Office. By birth and education Leslie was a member of the Victorian intellectual aristocracy, and his upbringing was typical of his class and time. Educated at Eton and at Trinity Hall, Cambridge, he first determined on an academic career, which required his entry into Anglican orders. He was ordained deacon in 1855 and priest in 1859. A few years later, in a typically Victorian intellectual crisis which led him to religious doubt as a result of his reading of the works of J. S. Mill, he resigned his Cambridge fellowship and in 1867 began a literary career.

The whole of Stephen's outlook for the rest of his life was shaped by this early crisis. Increasingly he came under Darwinian influences and moved steadily toward agnosticism. In 1875 he resigned his priesthood. His first and most important work, English Thought in the Eighteenth Century (2 vols., 1876), revealed the full scale of his agnostic values and assumptions. For Stephen, with his strong Evangelical background, the great goal of 19th-century philosophy was to preserve the ethics of theism in an increasingly nontheistic world. Between 1878 and 1882 he wrote a work of philosophical synthesis which he hoped would win him a reputation as a major thinker by putting the traditional ethics on a scientific base of utilitarianism and Darwinism. The work, entitled The Science of Ethics (1882), was such a failure that i t permanently altered Stephen's career and caused him to devote the rest of his life to high-level journalism and editing.

From 1882 to 1889 Stephen was editor of the Dictionary of National Biography, and during this time 26 volumes appeared; he also contributed 378 biographical articles. He produced, in addition to a number of lesser works, two substantial studies, The English Utilitarians (1900) and English Literature and Society in the Eighteenth Century, which was published on the day of his death, Feb. 22, 1904.

Stephen was neither a great thinker nor an original scholar. His writings, though often lucid and intelligent, were Victorian period pieces which reveal as much about the author and the age in which he lived as they do about their subjects.

Leslie Stephen, Sir from Gale. ©2005-2006 Thomson Gale, a part of the Thomson Corporation. All rights reserved.