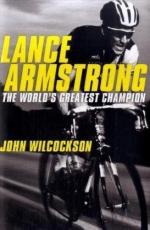 Get Lance Armstrong from Amazon.com
View the Study Pack

This Biography consists of approximately 7 pages of information about the life of Lance Armstrong.

Lance Armstrong (born 1971) will certainly be remembered for being an outstanding athlete and four-time winner of the Tour de France, but he will touch more lives through the Lance Armstrong Foundation and the Race for the Roses charity bike ride, which raise money for cancer research and assistance.

Lance Armstrong was born in Plano, Texas, on September 18, 1971. His biological father moved out when he was a baby, and he and his mother were on their own. When he was three-years-old, his mother was remarried to a man named Terry Armstrong. Terry Armstrong also formally adopted Lance. There was very little money, but his mother worked hard to provide him with a good life. When he was seven-years-old, she worked out a deal with the local bike store and bought him a Schwinn Mag Scrambler.

He was a child who like to do things on his...

More summaries and resources for teaching or studying Lance Armstrong.

Lance Armstrong from Gale. ©2005-2006 Thomson Gale, a part of the Thomson Corporation. All rights reserved.