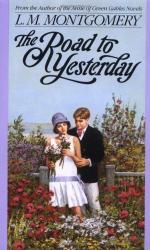 Get L. M. Montgomery from Amazon.com
View the Study Pack

This Biography consists of approximately 19 pages of information about the life of L. M. Montgomery.

Authors and Artists for Young Adults on L. M. Montgomery

"'The five-thirty train has been in and gone half an hour ago,' answered that brisk official. 'But there was a passenger dropped off for you--a little girl. She's sitting out there on the shingles. I asked her to go into the ladies' waiting room, but she informed me gravely that she preferred to stay outside. "There was more scope for the imagination," she said. She's a case, I should say.'

"'I'm not expecting a girl,' said Matthew blankly. 'It's a boy I've come for. He should be here. Mrs. Alexander Spencer was to bring him over from Nova Scotia for me.'

"'Guess there's some mistake,' he said."

Thus begins Anne Shirley's new life in Prince Edward Island, with her adoptive guardian finding out at the train station that the orphanage sent a girl, instead of the boy that was requested...

L. M. Montgomery from Gale. ©2005-2006 Thomson Gale, a part of the Thomson Corporation. All rights reserved.