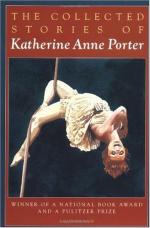 This Biography consists of approximately 3 pages of information about the life of Katherine Anne Porter.

The works of Katherine Anne Porter (1890-1980), American writer, were characterized by delicate perceptions and painstaking craftsmanship.

Katherine Anne Porter was born on May 15, 1890, in Indian Creek, Texas. She was a descendant of Jonathan Boone, brother of Daniel Boone, and a cousin of O. Henry (Sidney Porter). After the death of her mother in 1892, Porter and her four siblings went to live with their paternal grandmother. After her grandmother died in 1901, Porter was sent to several convent schools in Texas and Louisiana.

In 1906 Porter ran away from school and got married; she was divorced three years later. In 1911 she went to Chicago to work on a newspaper. She returned to Texas in 1914 and worked briefly as an entertainer, singing Scottish ballads.

From early childhood Porter had been writing stories, an activity she described as the unifying passion of her life, but her writing career began with hackwork, chiefly...

Katherine Anne Porter from Gale. ©2005-2006 Thomson Gale, a part of the Thomson Corporation. All rights reserved.