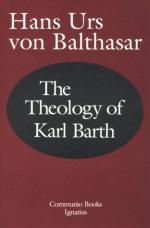 Get Karl Barth from Amazon.com
View the Study Pack

This Biography consists of approximately 4 pages of information about the life of Karl Barth.

Karl Barth was born on May 10, 1886, in Basel, the eldest son of a Swiss Reformed minister. Raised in an atmosphere of evangelical piety and theological learning, Karl decided at the age of 16 to become a theologian. Between 1904 and 1908 he was educated at the universities of Bern, Berlin, Tübingen, and Marburg and studied under the leading Protestant religious scholars of the day. In 1908 Barth was ordained to the Swiss Reformed ministry. He then served as pastor of congregations in Geneva (1909-1911) and in the village of Safenwil (1911-1921). In 1913 Barth married Nelly Hoffman, and they had three sons and a daughter.

Thoroughly educated in the liberal Protestant approaches to Christianity, early in his career Barth...

More summaries and resources for teaching or studying Karl Barth.

Karl Barth from Gale. ©2005-2006 Thomson Gale, a part of the Thomson Corporation. All rights reserved.