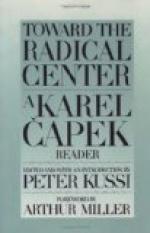 Get Karel Capek from Amazon.com
View the Study Pack

This Biography consists of approximately 2 pages of information about the life of Karel Capek.

The Czech author Karel Capek (1890-1938) was a noted novelist, playwright, and essayist. He was perhaps the best-known Czech literary figure of the 1920s and 1930s.

Born in northeastern Bohemia on Jan. 9, 1890, Karel Capek was the son of a physician. He studied philosophy at the Czech University of Prague, where he was influenced in his thinking by Henri Bergson and by modern American philosophy. In 1914 he earned a doctorate. He remained, except for numerous travels abroad, in Prague until the end of his life. In 1935 he married the well-known actress Olga Scheinpflugóva.

Capek's first creative phase (1908-1921) was marked by close collaboration with his brother, Joseph, who later became a distinguished painter. This period in his writing career culminated in two collections of short stories. The central motif of Wayside Crosses (1917) is the mechanism of modern civilization--"Everything that we touch becomes a tool...

More summaries and resources for teaching or studying Karel Capek.

Karel Capek from Gale. ©2005-2006 Thomson Gale, a part of the Thomson Corporation. All rights reserved.