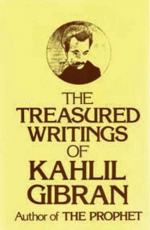 Get Kahlil Gibran from Amazon.com
View the Study Pack

This Biography consists of approximately 4 pages of information about the life of Kahlil Gibran.

Kahlil Gibran, baptized Gibran Khalil Gibran, the oldest child of Khalil Gibran and his wife Kamila Rahme, was born January 6, 1883, in Besharri, Lebanon, then part of Syria and the Ottoman Turkish Empire. His childhood in the isolated village beneath Mt. Lebanon included few material comforts and he had no formal early education. However, he received a strong spiritual heritage.

Surrounded for centuries by members of the Moslem and Druze religions, residents of Maronite Christian villages like Besharri evolved a mystical philosophy of life. His later work was influenced by legends and biblical stories handed down for generations in the scenic region near the ancient Cedars of Lebanon.

Seeking a better future, the family, except for their father, moved to America in 1895. They joined relatives and shared a tenement...

More summaries and resources for teaching or studying Kahlil Gibran.

Kahlil Gibran from Gale. ©2005-2006 Thomson Gale, a part of the Thomson Corporation. All rights reserved.