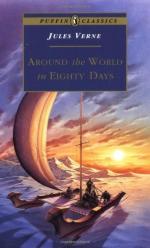 Get Jules Verne from Amazon.com
View the Study Pack

This Biography consists of approximately 3 pages of information about the life of Jules Verne.

The French novelist Jules Verne (1828-1905) was the first authentic exponent of modern science fiction. The best of his work is characterized by intelligent predictions of technical achievements actually within man's grasp at the time Verne wrote.

Jules Verne was born on Feb. 8, 1828, at Nantes, the eldest son of a prosperous provincial lawyer. An otherwise uneventful childhood was marked by one major escapade. In his twelfth year, Jules shipped as a cabin boy on an ocean-going three-master. The ship was intercepted by his father before it had put out to sea, and Jules is said to have promised his parents that "in future he would travel only in imagination"--a prediction fulfilled in a manner his parents could not have foreseen.

Career as a Playwright

In 1847 Verne went to Paris to study law, although privately he was already planning a literary career. Owing to the friendship he made...

More summaries and resources for teaching or studying Jules Verne.

Jules Verne from Gale. ©2005-2006 Thomson Gale, a part of the Thomson Corporation. All rights reserved.