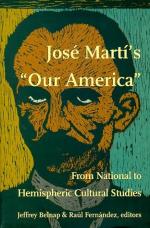 Get José Martí from Amazon.com
View the Study Pack

This Biography consists of approximately 3 pages of information about the life of Jos&eacute; Mart&iacute;.

José Martí (1853-1895) was a Cuban revolutionary, poet, and journalist. The principal organizer of Cuba's war against Spain, he was the apostle of Cuban independence.

José Martí was born in Havana on Jan. 28, 1853, of Spanish parents. In school, where he was an eager student, his teachers aroused in him a devotion to the cause of freedom, and he also achieved early recognition as a writer. At the age of 15 he composed several poems; at 16 he published a Havana newspaper, La Patria Libre, and wrote a dramatic poem, Abdala. Arrested for political reasons, Martí served several months at hard labor before he was deported to Spain in January 1871.

There Martí published a political essay, El presidio político en Cuba, an indictment of Spanish oppression and conditions in Cuban jails. The young revolutionary also resumed his studies, and in 1874 he...

More summaries and resources for teaching or studying Jos Mart.

José Martí from Gale. ©2005-2006 Thomson Gale, a part of the Thomson Corporation. All rights reserved.