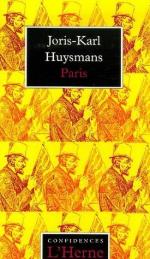 Get Joris Karl Huysmans from Amazon.com
View the Study Pack

William Kotzwinkle
This Biography consists of approximately 2 pages of information about the life of Joris Karl Huysmans.

The novelist Joris Karl Huysmans (1848-1907) was a leading French exponent of the decadent movement. His works, though intensely personal, present artistic and intellectual life in late-19th-century France.

Charles Marie Georges Huysmans, who wrote under the pseudonym of Joris Karl Huysmans was born in Paris on Feb. 5, 1848, the only son of a French mother and a Dutch father. In 1866 he entered the civil service and was employed by the Ministry of the Interior until his retirement in 1898.

Huysmans' earliest works reflect the influence of contemporary French masters. His first publication, Le Drageoir à épices (1874), was a collection of Baudelairian prose poems. He next wrote a series of naturalistic novels that focused on the sordidness and futility of everyday life: Marthe (1876), Les Soeurs Vatard (1879), and En ménage (1881). These works were early indexes of the distinctive style and the talent for precise, detailed description which were to characterize all of Huysmans' writing. While he was a member of Émile Zola's Médan group of naturalist writers, his wartime anecdote Sac au dos was published in the collective volume Les Soirées de Médan (1880).

Huysmans remained a disciple of Zola for only a short time and soon asserted his independence from codified naturalism. His subsequent novels formed a loosely linked series in which the author, under various guises, traced his quest for happiness.

The first of this group was A vau-l'eau (1882; Down Stream), a pessimistic account of the empty existence of an obscure functionary. It was followed in 1884 by À rebours (Against the Grain), the most characteristic and best known of Huysmans' novels. The jaded protagonist, Des Esseintes, quickly became the prototype for the finde-siècle decadent hero. Distancing himself still further from Zola's doctrine, Huysmans wrote En rade (1887), a curious blend of naturalistic descriptions and surrealistic dream sequences, and Là-bas (1891; Down There), a study of medieval and modern satanism.

Huysmans' last novels are primarily an intellectual and spiritual self-portrait: En route (1895) recounts his return to Catholicism; La Cathédrale (1898) is an erudite study of the Chartres Cathedral; and L'Oblat (1903) depicts the author's life as a lay monk in a Benedictine monastery from 1899 to 1901.

Huysmans also ranks as one of the foremost art critics of his generation and was one of the first to appreciate the impressionists in L'Art moderne (1883) and in Certains (1889). Huysmans died of cancer on May 12, 1907, in Paris.

Joris Karl Huysmans from Gale. ©2005-2006 Thomson Gale, a part of the Thomson Corporation. All rights reserved.