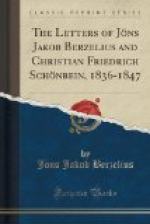 Get Jöns Jacob Berzelius from Amazon.com
View the Study Pack

This Biography consists of approximately 5 pages of information about the life of J&ouml;ns Jacob Berzelius.

The Swedish chemist Jöns Jacob Berzelius (1779-1848) was one of the first European scientists to accept John Dalton's atomic theory and to recognize the need for a new system of chemical symbols. He was a dominant figure in chemical science.

Jöns Jacob Berzelius, the son of a clergyman-schoolmaster, was born on Aug. 20, 1779, at Väversunda, Sweden. He studied for 6 years at the medical school at Uppsala and then studied chemistry at the Stockholm School of Surgery. In 1808 he was elected to the Swedish Academy of Science and was appointed its secretary in 1818. He married Elisabeth Poppius in 1835 and on that occasion was made a baron by the Swedish king, Charles XIV.

During the first decade of the 19th century, chemists were becoming aware that chemicals combined in definite proportions. This concept, sometimes known as Proust's law after the...

Jöns Jacob Berzelius from Gale. ©2005-2006 Thomson Gale, a part of the Thomson Corporation. All rights reserved.