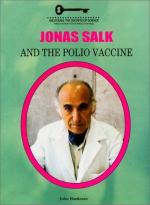 Get Jonas E. Salk from Amazon.com
View the Study Pack

This Biography consists of approximately 2 pages of information about the life of Jonas E. Salk.

Jonas Salk was born in New York, New York, on October 28, 1914. He received his medical degree from New York University in 1939. In 1942, Salk began working for a former teacher, Thomas Francis, Jr., to produce influenza vaccines, a project that continued until 1949. That year, as a research professor, Salk began a three-year project sponsored by the National Foundation for Infantile Paralysis, also known as the March of Dimes. Caused by the poliomyelitis virus, polio was also known as infantile paralysis. Periodic outbreaks of the disease, which attacks the nervous system, caused death or a lifetime of paralysis, especially in children. It was a difficult disease to study because sufficient viruses could not be obtained. Unlike bacteria, which can be grown in cultures, viruses need living tissue on which to grow. Once a method for preparing viruses was discovered and improved, sufficient viruses became available for research.

Salk first set out to confirm that there were three virus types responsible for polio and then began to experiment with ways to kill the virus and yet retain its ability to produce an immune response. By 1952, he had produced a dead virus vaccine that worked against the three virus types. He began testing. First the vaccine was tested on monkeys, then on children who had recovered from the disease, and finally on Salk's own family and children, none of whom had ever had the disease. Following large-scale trials in 1954, the vaccine was finally released for public use in 1955. The Salk vaccine was not the first vaccine against polio, but it was the first to be found safe and effective. By 1961, there was a 96 percent reduction in polio cases in the United States. In the 1960s, the Sabin live-virus vaccine, developed by Albert Sabin, began to replace the Salk vaccine because of the ease of its effective one-time oral administration. However, the Salk vaccine is still considered a triumph of medical science.

Salk opened the Salk Institute for Biological Studies in La Jolla, California, in 1963. In his later years, he directed research in developing vaccines against cancer and AIDS. Salk died on June 23, 1995.

Jonas E. Salk from Gale. ©2005-2006 Thomson Gale, a part of the Thomson Corporation. All rights reserved.