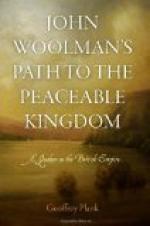 Get John Woolman from Amazon.com
View the Study Pack

This Biography consists of approximately 2 pages of information about the life of John Woolman.

John Woolman (1720-1772), American Quaker merchant and minister, was known for his opposition to slavery, poverty, and war. His journal is one of the finest statements of Quaker inner life.

John Woolman was born in Ancocas, N.J., and raised in Quaker schools and meetings. He read widely and prepared himself for a variety of occupations. Primarily a tailor and shopkeeper, he also kept an apple orchard, taught school, wrote, maintained a lending library, and was a surveyor and conveyancer. As conveyancer, he wrote bills of sale for slaves; this was his introduction to slavery. His meeting recorded him as a minister in 1743.

Woolman's was an itinerant ministry; his territory included the Atlantic seaboard, England, and Ireland. He traveled twice to the South, where he witnessed plantation life. His advocacy of the abolition of slavery, Some Considerations on the Keeping of Negroes, was published in two parts in 1754 and 1762. In 1763 Woolman visited the Indians on the Pennsylvania frontier, converting many to the Quaker ideals of peace and Christian brotherhood. In 1772, in Yorkshire, England, he made a walking tour in protest against the treatment of postboys. He died of smallpox at York on Oct. 7, 1772.

The mystical experience underlies Woolman's positions on social and economic questions. Convinced of the universal brotherhood of man with Christ, he regarded no distinction of nationality, race, or education as more basic to human nature. Woolman identified with the evildoer and with the slaveholder as well as the slave. He was a keen student of his own motives. He located first in himself the tendencies he sought to eradicate from the world. He devised a theory of action, which he called "passive obedience," similar to contemporary nonviolence. Woolman found the causes of war in the economic self-aggrandizement of nations.

Woolman strove to strengthen his community at Mount Holly, N.J., and resisted oppression by every lawful means. He gave up dyed clothes when he discovered the dyes were harmful to the workers. He ate no sugar because of his convictions about slavery. When his own merchandising business succeeded, he withdrew to concentrate on the "inward business" of living.

Woolman's publications included An Epistle (1772), defining his religious beliefs; his Journal (1774); and Plea for the Poor (1793). Modern peace and civil rights advocates feel akin to this quiet radical.

More summaries and resources for teaching or studying John Woolman.

John Woolman from Gale. ©2005-2006 Thomson Gale, a part of the Thomson Corporation. All rights reserved.