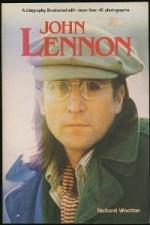 Get John Winston Lennon from Amazon.com
View the Study Pack

Richard Wootton
This Biography consists of approximately 5 pages of information about the life of John Winston Lennon.

The English musician, poet, and songwriter John Winston Lennon (1940-1980) was a founder of The Beatles, the single most important and influential group in the history of rock 'n' roll music. He was murdered in 1980.

John Winston Lennon was born on October 9, 1940, during a German air-raid over Liverpool. His father, Alf Lennon, was a seaman, who deserted his wife Julia and their infant child. Over twenty years later when Alf Lennon tried to reenter his famous son's life, Lennon did not welcome him. Unable to raise Lennon alone, Julia asked her sister and brother-in-law, Mimi and George Smith, to care for her son. Tragically, an off-duty police officer knocked down and killed Lennon's mother in 1958.

Lennon attended Dovedale Primary in Woolton, and then Quarry Bank High School. He continued his education at Liverpool's College of Art, where he met his future wife...

John Winston Lennon from Gale. ©2005-2006 Thomson Gale, a part of the Thomson Corporation. All rights reserved.