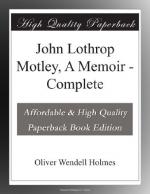 Get John Lothrop Motley from Amazon.com
View the Study Pack

This Biography consists of approximately 2 pages of information about the life of John Lothrop Motley.

The American historian and diplomat John Lothrop Motley (1814-1877) is best known for his outstanding history of the Dutch struggle for independence.

John Lothrop Motley was born in Dorchester, Mass., on April 15, 1814, to an old New England merchant family. He studied under historian George Bancroft at the noted Round Hill School in Northampton, Mass., and then went on to Harvard. After graduating in 1831 Motley continued his studies in Germany at Göttingen and Berlin.

After 1840 Motley pursued both a diplomat's and a historian's career. For a few months in 1841 he was secretary of the U.S. legation in St. Petersburg, Russia. In 1847 he settled on his life's work as a writer: the study of the struggle of the Netherlands for independence from Spain. "My subject," he wrote in retrospect, "had taken me up, drawn me on, and absorbed me into itself." Motley served as minister to Austria (1861-1867) and as minister to Great Britain (1869-1870).

Motley's Rise of the Dutch Republic (3 vols., 1856), published at his own expense, was an immediate success. Like other romantic historians, he wove his material into a picturesque, dramatic narrative dominated by striking personalities. His hero was William of Orange; his villain, Philip II. Motley's next work was The History of the United Netherlands (4 vols., 1860-1867). He hoped to cap his lifework with a history of the Thirty Years War, but it remained undone. Instead, he published The Life and Death of John of Barneveld, Advocate of Holland (1874), which included a study of the "causes and movements" of the Thirty Years War.

Motley's work accented political and religious liberty and the threat to it posed by Catholicism and the Spanish monarchy. His Protestant bias was exceedingly strong. His passion for research and the artistry of his composition, however, made him a master historian. Oliver Wendell Holmes (1879) compared Motley's colorful style to Peter Paul Rubens's paintings. A serious flaw in Motley's books was his tendency to contrast the best of Protestant civilization with the worst of Catholicism. Yet the reader cannot withhold praise for the strength of characterization Motley gave historical figures. Later scholars wrote their own versions of the rise of the Dutch Republic, but they paid tribute to the vitality of Motley's narrative. He died at Frampton Court, England, on May 29, 1877.

John Lothrop Motley from Gale. ©2005-2006 Thomson Gale, a part of the Thomson Corporation. All rights reserved.