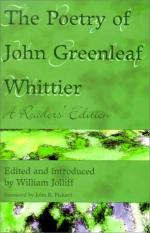 Get John Greenleaf Whittier from Amazon.com
View the Study Pack

This Biography consists of approximately 2 pages of information about the life of John Greenleaf Whittier.

John Greenleaf Whittier (1807-1892) was an American poet whose humanitarianism and great popular appeal established him as an important 19th-century figure.

John Greenleaf Whittier was born on a farm near Haverhill, Mass., on Dec. 17, 1807, of poor Quaker parents. His formal education was meager. At the age of 14 he discovered Robert Burns's poetry, with its Scottish dialect and humble, rural subjects. He began writing poems; one caught the eye of abolitionist William Lloyd Garrison, who published it in 1826 in his paper, the Newburyport Free Press. Garrison encouraged him to continue his schooling, and Whittier attended Haverhill Academy on and off for two years. For a time he also taught school. Meanwhile, his poems were being published in local newspapers.

Between 1829 and 1846 Whittier edited various journals, including the abolitionist Pennsylvania Freeman (1838-1840). In 1835 he served in the Massachusetts Legislature.

With his vigorous antislavery essay Justice and Expediency (1833), Whittier firmly committed himself to the abolitionist cause. His antislavery poems such as "The Yankee Girl," "The Slavery-Ships," "The Hunters of Men," "Massachusetts to Virginia," and "Ichabod" were equally vigorous. He was well aware of his limitations as a poet; his was poetry in service of a cause, a poetry, often, of declamation. As he had put it in "Proem," he was concerned with "Duty's rugged march through storm and strife" and viewed the "softer shades of Nature's face,/ ... with unanointed eyes." His volumes Lays of My Home (1843), Voices of Freedom (1846), and Songs of Labor and Other Poems (1850) reflected his belief in art as a weapon.

Poor health caused Whittier to curtail his editorial duties, but he was able to serve as contributing editor from 1847 to 1859 of the abolitionist journal National Era.

There was another, gentler side to Whittier. After about 1850 he also wrote folksy New England ballads and narrative poems, sentimental country idylls, and simple religious poems that appealed strongly to his readers. Among the most popular are "Skipper Ireson's Ride," "John Underhill," "Maud Muller," "Telling the Bees," "The Barefoot Boy," "Snow-Bound" (his masterpiece), "The Eternal Goodness," and "My Psalm."

John Greenleaf Whittier from Gale. ©2005-2006 Thomson Gale, a part of the Thomson Corporation. All rights reserved.