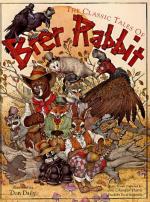 Get Joel Chandler Harris from Amazon.com
View the Study Pack

This Biography consists of approximately 2 pages of information about the life of Joel Chandler Harris.

American writer Joel Chandler Harris (1848-1908) used folklore, fiction, dialect, and other devices of local color to picture both black and white Georgians under slavery and Reconstruction.

Joel Chandler Harris was born in Eatonton, Ga., the illegitimate son of Mary Harris. Scantily educated, at 13 Harris became an apprentice printer on a little newspaper edited and published by Joseph Addison Turner, a highly literate planter, lawyer, and writer, and learned about writing under Turner's tutelage. Harris then worked on newspapers in several Southern cities. While in Savannah he met and married Esther LaRose; they had nine children. In 1876 Harris began a 24-year association with the Atlanta Constitution.

Harris's work as a columnist led to his creation of Uncle Remus, the black singer of songs and teller of stories. The tales, collected in Uncle Remus: His Songs and Sayings (1880), are based upon folklore and are told by the venerable family servant to a little boy on a Georgia plantation. The book's favorable reviews and large sales led to magazine publication of stories later collected in Nights with Uncle Remus (1883), Uncle Remus and His Friends (1892), Told by Uncle Remus (1905), and others.

Remus, the old storyteller, is wise, perceptive, imaginative, poetic, and gifted with a sly sense of humor. The stories can be read for the larger picture they give of the exploited blacks who invented them. Their hero, Brer Rabbit, as Harris observed, is "the weakest and most harmless of all animals," but he is "victorious in contests with the bear, the wolf, and the fox." Thus "it is not virtue that triumphs, but helplessness; it is not malice, but mischievousness." However, since Uncle Remus's casual revelations often picture idyllically the lives of slaves and kindly whites on an antebellum plantation, these tales cultivated sympathy for Harris's people and his South. Critics believe that Harris's conscious aim was to end sectional antagonism.

In other fictional works Harris enlarged his portrayal of Southerners to include aristocrats, members of the middle class, mountaineers, and poor white farmers. Genre stories appeared in Mingo and Other Sketches (1884), Free Joe (1887), and other collections. There were two novels: Sister Jane, Her Friends and Acquaintances (1896) and Gabriel Tolliver: A Story of Reconstruction (1902). Harris died on July 3, 1908, in Atlanta.

Joel Chandler Harris from Gale. ©2005-2006 Thomson Gale, a part of the Thomson Corporation. All rights reserved.