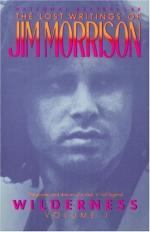 Get Jim Morrison from Amazon.com
View the Study Pack

This Biography consists of approximately 5 pages of information about the life of Jim Morrison.

Lead singer for the rock group the Doors, Jim Morrison (1943-1971) personified the mind-bending, uninhibited lifestyle of the 1960s, in his brief but brilliant career.

Like few bands other than the Beatles, the influence of the Doors has eclipsed the generation that first carried it to fame. Like the band, its leader, poet and visionary, Jim Morrison, continued to inspire fascination. Morrison has become a legendary figure, both in rock music and in popular culture, fueled to prominence by a score of books and articles, as well as by a major motion picture, The Doors, that recounted the musician's brief but tumultuous life.

Morrison was born in Melbourne, Florida, on December 8, 1943. His father, a career Navy officer, was transferred from base to base during his son's childhood, but, by his son's early teens, the family had settled in Alexandria, Virginia. After finishing high...

More summaries and resources for teaching or studying Jim Morrison.

Jim Morrison from Gale. ©2005-2006 Thomson Gale, a part of the Thomson Corporation. All rights reserved.