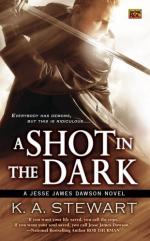 Get Jesse Woodson James from Amazon.com
View the Study Pack

This Biography consists of approximately 2 pages of information about the life of Jesse Woodson James.

American outlaw Jesse Woodson James (1847-1882) was a colorful bandit whose escapades made him a legendary figure of the Wild West.

Jesse James was born near Kearney, Mo., on Sept. 5, 1847, the son of a Baptist minister. Little is known about Jesse's childhood except that his father left the family in 1850 to minister to the gold prospectors in California and died soon after his arrival there. The three James children grew up on a Missouri farm with a stepfather.

As slave owners with origins in Kentucky, James's entire family were Southern sympathizers. So, during the Civil War, he joined the Confederate guerrilla band known as Quantrill's Raiders in 1863 or 1864. Returning to Missouri in 1865, Jesse and his brother Frank found that, although the Civil War was officially over, Missourians were still belligerent. In 1866 the James brothers joined forces with the Younger brothers to form an outlaw band.

Jesse Woodson James from Gale. ©2005-2006 Thomson Gale, a part of the Thomson Corporation. All rights reserved.