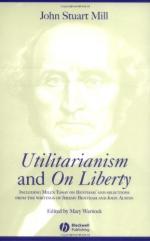 Get Jeremy Bentham from Amazon.com
View the Study Pack

This Biography consists of approximately 2 pages of information about the life of Jeremy Bentham.

Jeremy Bentham was a British lawyer and philosopher who worked for political and legal reforms in England during the late 1700's and early 1800s. His most enduring legacy is the philosophical school of thought known as Utilitarianism.

Bentham was born on February 15, 1748, in London, England. A child prodigy in both philosophy and music, Bentham entered Oxford University at the age of twelve. Although he studied law and was admitted to the bar, Bentham decided against the practice of law. Instead, he devoted his life to the study of philosophy and its application government reform.

Bentham, who was influenced by the French Philosopher Claude Adrien Helvetius, published in 1789 Introduction to the Principles of Morals and Legislation. The work drew immediate attention and acclaim, establishing Bentham as an important philosopher. Bentham rejected the idea that morality is based on unchanging principles. Instead he proposed that morality is based on the greatest happiness for the greatest number. Moreover, individuals seek to maximize what gives them pleasure and minimize what gives them pain. Therefore, individual and societal goals are complementary.

Unlike most philosophers, Bentham sought to apply these principles to help promote the maximization of happiness in society. He worked tirelessly to promote his agenda, which included prisons that reformed, rather than merely housed, prisoners. Bentham also was an early advocate of legal codification and assisted in collecting and compiling texts on specific areas of the law.

Bentham was part of a group known as the Philosophical Radicals, which included James Mill and his son, John Stuart Mill. John Stuart Mill became a follower of Bentham's and later emerged as a major political philosopher. The three men founded the Westminster Review, in which they published their philosophical and reformist articles.

Bentham's philosophy undermined legal theories based on natural law and natural rights. His scheme suggested that a political majority was permitted to legislate to achieve the greatest happiness at the expense of a political morality. In modern times, Utilitarianism has been criticized for separating morality from law. Since the 1950s legal positivism, which is based on Utilitarian principles, has sought to combat this criticism. However, critics remain convinced that these ideas undermine beliefs in right and wrong that help maintain the societal order. Bentham died on June 6, 1832 in London.

More summaries and resources for teaching or studying Jeremy Bentham.

Jeremy Bentham from Gale. ©2005-2006 Thomson Gale, a part of the Thomson Corporation. All rights reserved.