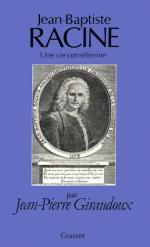 Get Jean Baptiste Racine from Amazon.com
View the Study Pack

This Biography consists of approximately 7 pages of information about the life of Jean Baptiste Racine.

The French dramatist Jean Baptiste Racine (1639-1699), admired as a portrayer of man's subtle psychology and overwhelming passions, was the author of 11 tragedies and a comedy. His work is the greatest expression of French classicism.

Jean Racine was born in La Ferté-Milon and baptized there on Dec. 22, 1639. Both of his parents died within a few years, and the young Racine went to live with his paternal grandparents. There he was cared for by his grandmother and by his aunt, both of whom lived in close contact with the Jansenist convent of Port-Royal-des-Champs near Paris. Racine was educated in the schools of Port-Royal, receiving what was perhaps the best education available in his times. Sent on to the Jansenist-influenced school in Beauvais, Racine learned ancient Greek in addition to his other studies, before completing his education at Port-Royal and in Paris.

At some time before...

Jean Baptiste Racine from Gale. ©2005-2006 Thomson Gale, a part of the Thomson Corporation. All rights reserved.