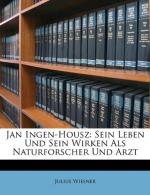 Get Jan Ingenhousz from Amazon.com
View the Study Pack

This Biography consists of approximately 2 pages of information about the life of Jan Ingenhousz.

The Dutch physician, chemist, and engineer Jan Ingenhousz (1730-1799) is noted for his demonstration of the process of photosynthesis in plants.

Jan Ingenhousz was born on Dec. 8, 1730, in Breda. He studied medicine at the University of Louvain and graduated in 1752. After spending some years in several European capitals in the typical 18th-century tradition, he settled in London in 1779 and worked with the celebrated naturalist John Hunter.

In that year Ingenhousz published his important book, Experiments upon Vegetables--Discovering Their Great Power of Purifying the Common Air in the Sunshine and of Injuring It in the Shade and at Night. In this work he anticipated by 2 years Joseph Priestley's discovery of the principles of what is now called photosynthesis, that is, the process by which plants exude oxygen and absorb carbon dioxide, thus purifying the air for animals and man.

Unlike Priestley and other chemists who were working on the...

More summaries and resources for teaching or studying Jan Ingenhousz.

Jan Ingenhousz from Gale. ©2005-2006 Thomson Gale, a part of the Thomson Corporation. All rights reserved.