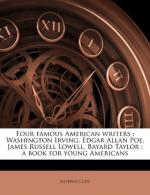 Get James Russell Lowell from Amazon.com
View the Study Pack

This Biography consists of approximately 2 pages of information about the life of James Russell Lowell.

The versatility of American poet, editor, and diplomat James Russell Lowell (1819-1891) made him an influential figure in 19th-century America.

James Russell Lowell was born in Cambridge, Mass., on Feb. 22, 1819, of a well-established New England family. Following family tradition, he attended Harvard, graduating in 1838 and taking a law degree there in 1840. Soon after the publication of his first volume of poems, A Year's Life (1841), he gave up law to devote himself to literature.

Encouraged by the success of his second volume, Poems (1844), Lowell married Maria White, a poet and abolitionist whose zeal for attacking social injustices Lowell soon absorbed. For a year he was an editorial writer for the abolitionist journal the Pennsylvania Freeman.

Lowell's reputation as a social critic was soundly established with the publication of the Biglow Papers (first series, 1848). Speaking in dialect through the homespun Yankee character Hosea Biglow, Lowell attacked the war with Mexico as an attempt to extend slave territory. He revived Biglow in 1862 in support of the Union cause against the Confederacy (second series, 1867). The year 1848 also saw the publication of The Vision of Sir Launfal, Poems: Second Series, and A Fable for Critics, humorous (and often barbed) verse which offered Lowell's estimation of a number of contemporary writers--himself included.

A trip abroad in 1851-1852 was followed by the death of Lowell's wife. He married Frances Dunlap in 1857. In 1855 Lowell began his career as a teacher by succeeding Henry Wadsworth Longfellow as professor of modern languages at Harvard, a position he held with distinction until 1876, when he retired. During this period he also served as editor of the newly founded Atlantic Monthly (1857-1861) and the North American Review (1864-1872), wrote books, and took an active interest in politics. In the final phase of his career Lowell served ably as ambassador to Spain (1877-1880) and England (1880-1885).

James Russell Lowell from Gale. ©2005-2006 Thomson Gale, a part of the Thomson Corporation. All rights reserved.