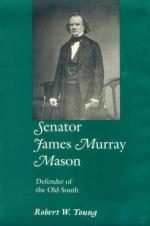 Get James Murray Mason from Amazon.com
View the Study Pack

This Biography consists of approximately 2 pages of information about the life of James Murray Mason.

James Murray Mason (1798-1871), U.S. Senator and Confederate diplomat, is best known for his authorship of the 1850 Fugitive Slave Law and his Confederate mission to England.

James M. Mason was born on Nov. 3, 1798, at Georgetown, D.C. After an excellent elementary education, he graduated from the University of Pennsylvania in 1818. He studied law at the College of William and Mary and established his law practice at Winchester, Va., in 1820.

In Washington, Mason associated with the most prominent Southern Rights Democrats, especially John C. Calhoun. It is not surprising that Mason drafted the famous Fugitive Slave Law of 1850 or that he read Calhoun's speech to the Senate on the proposed compromise measures. When Abraham Lincoln was elected president in 1860, Mason argued for Southern secession. For Mason, the "irrepressible conflict" was between two social and economic civilizations, one agrarian and the other industrial. Slavery, advocated by Mason, was only one part of the Southern civilization.

Confederate president Jefferson Davis appointed Mason diplomatic commissioner to England in 1861. Mason had great personal charm, despite his critics' charge that he was untidy and chewed tobacco and spat on the floor of Parliament. He possessed impressive qualifications: a clear position on the issue of Southern rights, a conciliatory demeanor, high social connections, and 10 years as chairman of the Senate Foreign Relations Committee. The U.S. Navy's seizure of Mason and John Slidell, Confederate commissioner to France, while they were aboard the British ship Trent caused a serious diplomatic crisis between the United States and England. In January 1862 Mason and Slidell were released and resumed their mission.

Mason was never received officially by the British government, and he obtained only three interviews with British officials, all as a private citizen. He cultivated friendships with powerful political and economic figures, acted as a central purchasing agent for the Confederacy, cooperated with propagandists, and promoted the sale of Confederate bonds. Yet his primary mission, to persuade the British to recognize and aid the Confederacy, was singularly unsuccessful.

After the Civil War, Mason fled to Canada. In 1868 he returned to Virginia and settled near Alexandria, where he died on April 28, 1871.

James Murray Mason from Gale. ©2005-2006 Thomson Gale, a part of the Thomson Corporation. All rights reserved.