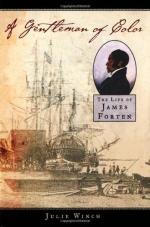 Get James Forten from Amazon.com
View the Study Pack

This Biography consists of approximately 2 pages of information about the life of James Forten.

James Forten (1766-1842), one of America's most prominent black abolitionists, was also an inventor and entrepreneur and one of the wealthiest Americans of his day.

James Forten was born free in Philadelphia on Sept. 2, 1766. For a short time he attended a Quaker school, but at 14 he entered the Navy. During the American Revolution, Forten's patriotic zeal was illustrated when his ship was captured by a British frigate and he was taken prisoner. Because of his youth he was offered his freedom--in England. He replied: "I am here a prisoner for the liberties of my country. I never, never shall prove a traitor to her interests!"

After the Revolution, Forten was apprenticed to a sailmaker. He quickly mastered the trade, and by the time he was 20 he was a top sailmaker. Shortly thereafter he invented a device for the improved handling of sails and became the owner of his own sail loft. Soon he was the wealthiest black man in Philadelphia and one of the most affluent Americans of his time. His holdings were estimated at more than $100,000.

Forten used his money for humanitarian causes. He was a strong advocate of women's rights, temperance, and the freedom of African Americans who were still slaves. At first Forten thought the colonization of free blacks in Africa might be the best policy. He reasoned that they could "never become a people" until they were entirely free of the white majority. However, in 1817, when the issue was discussed in a public meeting in Philadelphia, Forten found the sentiments of the 3,000 free blacks who attended overwhelmingly against colonization. They were Americans, and they saw no reason why they should leave America, and Forten sensed that they were right. Subsequently he vigorously opposed the expatriation schemes of the Colonization Society, and he influenced William Lloyd Garrison and Theodore Weld to see that black people should be free--in America, their own homeland.

Forten is best known as an abolitionist, and he spent a good part of his fortune underwriting Garrison's fiery Liberator. But Forten was also a leading citizen of Philadelphia and highly respected by both races. He was president of the Moral Reform Society and was a leader in the "Convention movement," which was started in the 1830s to improve the circumstances of black Americans. He died on March 4, 1842.

More summaries and resources for teaching or studying James Forten.

James Forten from Gale. ©2005-2006 Thomson Gale, a part of the Thomson Corporation. All rights reserved.