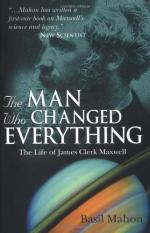 Get James Clerk Maxwell from Amazon.com
View the Study Pack

This Biography consists of approximately 7 pages of information about the life of James Clerk Maxwell.

James Clerk Maxwell was born in Edinburgh on June 13, 1831. His father, who was a lawyer, was first named John Clerk but adopted the surname of Maxwell upon his succession to an estate, Glenlair, situated near Dalbeattie. James was a quiet child "much given to reading, drawing pictures, chiefly of animals, and constructing geometric models." A favorite pastime was reflecting the sun about his room with a highly polished tinplate, an activity which seemed to presage his adult preoccupation with optical phenomena.

James's strange mode of dress helped earn him the nickname "Dafty" at Edinburgh Academy, where he was enrolled in 1841. His father, aware of his son's scholarly aptitude, began taking James to meetings of the Edinburgh Society of...

James Clerk Maxwell from Gale. ©2005-2006 Thomson Gale, a part of the Thomson Corporation. All rights reserved.