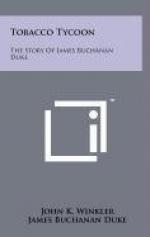 Get James Buchanan Duke from Amazon.com
View the Study Pack

This Biography consists of approximately 2 pages of information about the life of James Buchanan Duke.

James Buchanan Duke (1856-1925), American industrialist and philanthropist, was the first giant of finance to emerge in the post-Civil War South.

James B. Duke was born on Dec. 23, 1856, on a small farm near Durham, N.C., the younger son of Washington Duke. Union troops during the Civil War so ravaged their farm that at war's end, when Washington Duke returned from service in the Confederate Army, the family had to begin anew with total assets of 50 cents and two blind mules. The discovery of a small load of tobacco that had somehow escaped capture by Union forces triggered their rise to wealth. This supply sold so quickly that the Dukes began production and distribution on a large scale. By 1872, at the height of the South's impoverishment, the family was selling 125,000 pounds of tobacco annually.

When, in 1881, the Dukes began to manufacture cigarettes, business boomed. Three years later, with James in control, the company moved its executive offices to New Jersey to take advantage of that state's liberal corporation laws and to exploit the virgin markets of the North and West. Thereafter, the business grew into an international combine as Duke pursued monopolistic methods. Rebates, discrimination, a nationwide secret service, bulldozer tactics against competitors, and price manipulations marked the long "Tobacco War," by which Duke gained complete ascendancy over all rivals.

By 1904 Duke's American Tobacco Company controlled 90 percent of the national market and at least 50 percent of the foreign trade in tobacco. With unlimited power and a capitalization of over $500,000,000, the Duke trust was so powerful that a 1911 Supreme Court decree ordering their monopoly be dissolved had little effect on the company's prosperity.

Duke also developed an interest in the potential of electrical power. In 1905 he organized the Southern (now Duke) Power and Light Company. Within 25 years this utility was "capable of producing more energy than all the slaves of the Old South."

Duke contributed large sums to hospitals and churches. His last notable act was the establishment of the Duke Endowment on behalf of a small Methodist school, Trinity College. He donated more than $60,000,000 toward the creation of a new campus characterized by large buildings of Gothic design. The school was renamed Duke University.

The tall, rugged, redheaded industrialist died on Oct. 10, 1925. Once asked the secret of his success, Duke replied simply, "I had confidence in myself."

James Buchanan Duke from Gale. ©2005-2006 Thomson Gale, a part of the Thomson Corporation. All rights reserved.