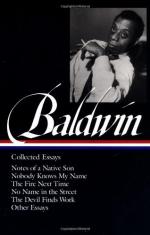 Get James Arthur Baldwin from Amazon.com
View the Study Pack
Related Topics
I Am Not Your Negro

James Baldwin
This Biography consists of approximately 3 pages of information about the life of James Arthur Baldwin.

The author James Arthur Baldwin (1924-1987) achieved international recognition for his bold expressions of African American life in the United States.

James Baldwin was born in Harlem, New York City, on August 2, 1924, the oldest of nine children. His father was a lay preacher in the Holiness-Pentecostal sect, and at the age of 14 Baldwin was also ordained a preacher. At 18 he graduated from DeWitt Clinton High School, and in 1944 he met Richard Wright, who helped secure a fellowship that allowed Baldwin the financial freedom to devote himself solely to literature. By 1948 Baldwin had concluded that the social tenor of the United States was stifling his creativity, and he went to Europe with the financial assistance of a Rosenwald fellowship. In Europe, Baldwin completed Go Tell It on the Mountain (1953), Notes of a Native Son (1955), and Giovanni's Room (1956).

Returning to the United States after nine...

James Arthur Baldwin from Gale. ©2005-2006 Thomson Gale, a part of the Thomson Corporation. All rights reserved.